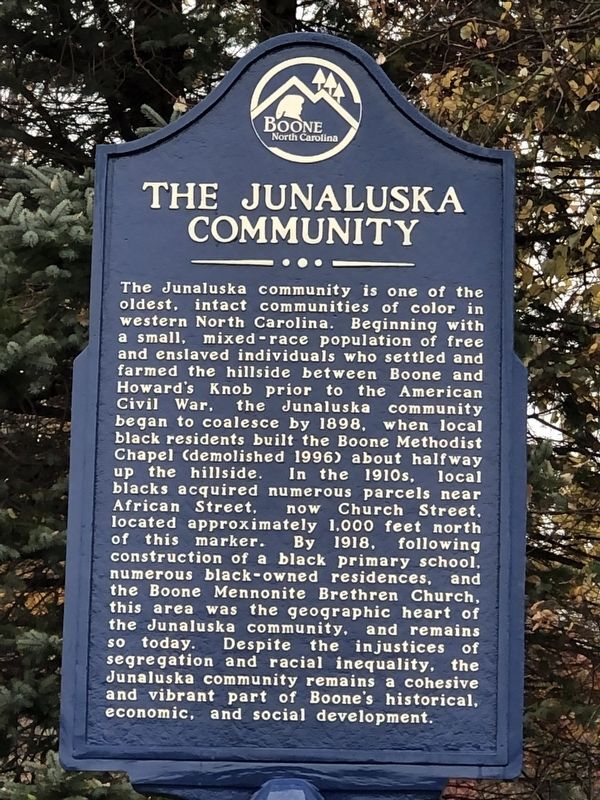 For over a century, a historical district overlooking downtown Boone stood unnoticed for far too long. The patchwork of neighborhoods and narrow streets located at Howard’s Knob was once the heart of Boone’s African American community known as Junaluska. Recently the Boone Historic Preservation Commission, in partnership with the Junaluska Heritage Association, has worked to shed light on  contributions of the community with the dedication of a historical marker.

African Americans have lived in Watauga County since its foundation in 1849. Yet, it was not until the end of the Civil War when the community began to take shape. When farmers both free and formerly enslaved began carving out a community below Howard’s Knob…. Throughout the years, the community spread, growing from just a handful of farms to clusters of black-owned businesses spreading across the mountainside. As the town expanded and new housing replaced the farmer's fields along the base of Howard’s Knob, the community of Junaluska, like the surrounding landscape, began to change. Over time, members of the community and the memory of Junaluska faded.

The Junaluska marker will be only the second historical marker put in place by the town’s Historic Preservation Commission. The first was a marker memorializing the events of the 1940 flood, which devastated Watauga County and brought an end to train service in Boone. The new marker will feature a summary of Junaluska’s history, outlining contributions African Americans have made to Boone's economic,social and cultural history.  The Marker states:

The Junaluska community is one of the oldest intact communities of color in western North Carolina. Beginning with a small, mixed-race population of free and enslaved individuals who settled and farmed the hillside between Boone and Howard’s Knob prior to the American Civil War, the Junaluska community began to coalesce by 1898, when local black residents built the Boone Methodist Chapel (demolished 1996) about halfway up the hillside. In the 1910s, local blacks acquired numerous parcels near African Street, now Church Street, located approximately 1,000 feet north of this marker. By 1918, following the construction of a black primary school, numerous black-owned residences, and the Boone Mennonite Brethren Church, this area was the geographic heart of the Junaluska community and remains so today. Despite the injustices of segregation and racial inequality, the Junaluska community remains a cohesive and vibrant part of Boone’s historical, economic, and social development.

At the corner of North Depot Street and Queen Street in Boone now stands a marker commemorating  Junaluska was unveiled on June 19th, 2021.