Junaluska and the Wider Community

In the heart of downtown Boone, the Junaluska Heritage Association enjoys local collaborative relationships with Appalachian State Univsity professors and students, as well as the Boone Historic Preservation Committee.

During  Dr. Andrea Burns’ Introduction to Public History course at ASU in the Fall of 2014, students created an exhibit called “Finding Junaluska: Exploring Boone’s African American Heritage.” The exhibit was unveiled on December 10th at the Anne Belk Library and stayed up until April of 2015.

Dr. Tom Whyte, of the Appalachian State University Anthropology department made three presentations about his research on the old Jordan Councill Cemetery in Boone. Two of these were given for the public at the Boone Mennonite Brethren Church, and the last was presented to the Boone Historic Preservation Commission, to pursue further community protection and research about the Jordan Councill Cemetery. 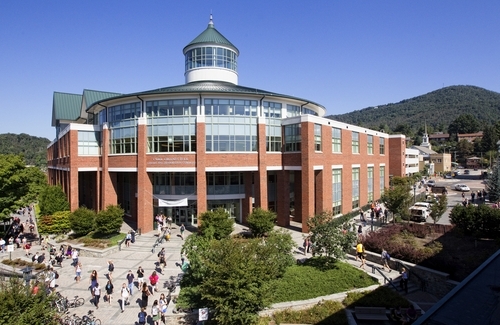 The Junaluska Heritage Association has also been involved with the two local libraries over the years. The Anne Belk Library on Appalachian State University's Campus, as well as the Watauga County Library, have been a part of the JHA's mission to spread community awareness.

In 2013, the JHA funded the purchase of new books. Two were chosen for the Watauga County Library (WCL), and two for Anne Belk Library. They included:

JHA also purchased each of the books for establishing own library in basement of Boone Mennonite Brethren Church. An article about the gifts can be found here.

On February 8, 2014, JHA co-sponsored an author reading and book signing with the Watauga County Library to recognize Black History Month and the 50th anniversary of Civil Rights Legislation THis event was held at ASU’s Belk Library.

In April of 2015, the Mu Upsilon chapter of Kappa Alpha Psi Fraternity Incorporated hosted a forum with Junaluska community members to raise awareness and visibility.

Aaron Pardue, an Appalachian Studies grad student, created a 16-minute DVD presentation about Junaluska and its history, which has been given to JHA for civic club presentation and use in public information.

According to their site, the Junaluska History Project:

"...is engaged in uncovering the heritage and history of Junaluska, Watauga County's only African-American community."

You can learn more about the ACT program here.